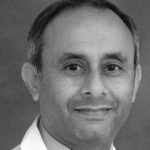 Dr. Pasricha received his M.D. degree from the All-India Institute of Medical Sciences, New Delhi in 1982. Subsequently he trained in internal medicine and pulmonology at Georgetown University-DC General Hospital and Tufts-New England Medical Center, respectively. Thereafter he trained in Gastroenterology at Johns Hopkins Hospital and then stayed on faculty at Johns Hopkins University, as Director of Therapeutic Endoscopy at Johns Hopkins Hospital and Associate Director of the Marvin Schuster Center for Gastrointestinal Motility. In 1997 Dr Pasricha assumed leadership of the GI Division at the University of Texas Medical Branch, where he was the Bassel and Frances Blanton Distinguished Professorship in Internal Medicine until August 2007 prior to assuming the position of Chief of Gastroenterology and Hepatology at Stanford, Professor of Medicine, Professor of Surgery and Stanford Biodesign faculty. In 2012, Dr. Pasricha moved back to Johns Hopkins, where he is Professor of Medicine, Director of Digestive Disorders (Bayview) and Director of the Johns Hopkins Center for Neurogastroenterology.

These diverse appointments reflect his research interests, which span endoscopic, clinical and bench research. He has been a recipient of federal funding for his research since 1995 and currently is principal investigator on several NIH grants, in addition to numerous other grants and awards. His laboratory is interested in molecular mechanisms of visceral pain and restoration of enteric neural function with novel strategies including neural stem cell transplants. His clinical interests include GI motility disorders and abdominal pain as well as the development of novel endoscopic procedures and devices.

Dr. Pasricha has authored more than 200 manuscripts and book chapters including contributions to Cecil Textbook of Medicine, Yamada Textbook of Gastroenterology and Goodman and Gilman’s Pharmacological Basis of Therapeutics. His work has been presented at several national and international forums.He has consistently been on Castle Connelly list America’s “Top Docs” as well as “Best Doctors” in Gastroenterology. Dr. Pasricha serves on numerous national gastroenterological committees including the AGA, ACG and ASGE; he was Chair of the Research Committee of the American Society of Gastrointestinal Endoscopy until 1998, served as chair of the NIH Special Emphasis Panel on Endoscopic Clinical Research in Pancreatic and Biliary Diseases. He is currently the chair of the NIH-funded multi-center gastroparesis consortium. In addition, he served on the National Commission on Digestive Diseases, appointed by the Congress to provide a “roadmap” for progress in gastrointestinal disorders.

Dr. Pasricha’s career represents an exciting blend of clinical expertise, creativity and medical entrepreneurship that has resulted in several innovative solutions to common gastrointestinal healthcare problems. He has over 30 issued patents related to gastrointestinal diagnostics and therapeutics and has co-founded several companies in this space including Apollo Endosurgery and several other emerging businesses in this space. In addition he is a consultant to several companies both in medtech and biotech.